Difference between revisions of "New Colchis"

New Colchis is an archipelago of three main islands and a number of smaller islands that lies well to the south of the Rogue Isles along the Mid-Atlantic Ridge. The islands are volcanic and the climate is subtropical. They are shielded from discovery by outsiders by a mist that obscures vision if sailors who do not know the way attempt to visit them. The origin of the mist is unknown but is likely supernatural. The island is named after the Greek settlement of Colchis.

New Colchis is now home to an Amazon society of women warriors and gladiators whose lives are patterned after life in the ancient Roman Republic. 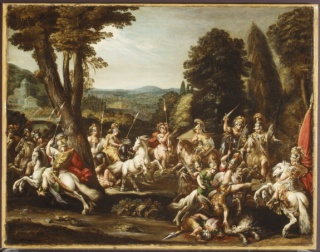 New Colchis is home to a classical culture of women warriors.

The three main islands are named Oës, Osonis, and Imæa, after the Three Mermaid Goddesses (below).

Imæa, the largest of the three islands, is a dormant shield volcano, covered mostly with volcanic savannahs and subtropical forests. Hunting, viniculture, and agriculture here feed the islanders. The volcano houses caves that lead to the Underworld.

Osonis, second largest of the islands, contains a large natural harbor. On it stands New Colchis, capitol of the Republic. New Colchis is a small city built of basalt rock and palm logs in a distinctive style, somewhat primitive, but seeking to imitate the features of classical Roman architecture.

Oës is the oldest of the islands geologically. It is the most geographically diverse of the islands, with eroded rocky prominences, dense forests, and open plains. It is used chiefly as a training ground for military exercises.

According to the founding legends, which may be believed or disbelieved at will, the Emperor Diocletian had thirty-three spirited daughters. Their independence was jarring to patrician Roman society, and Diocletian arranged marriages for each of them in order to compel them to conform. The women chafed at this, and at the instigation of the eldest of them, Julia Victrix, each of the daughters of Diocletian murdered their husbands on a prearranged night.

These murders shocked the Emperor, but he was loath to simply have his daughters put to death, so he had them set adrift in the Atlantic Ocean in a ship. There, they prayed to the Goddess Minerva, who steered them to the islands of New Colchis, which they named after classical Colchis, legendary home of the Amazons and the sorceress Medea. Here, they devoted themselves to the cultivation of military discipline in order to preserve their independence. 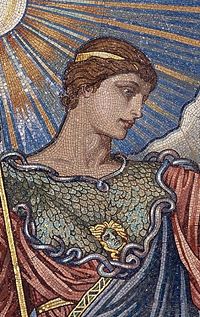 Minerva, chief goddess of the pantheon of New Colchis, is depicted in this mosaic
.

The permanent population of the island is exclusively composed of women, and numbers around 7,500. The islands are the last place on earth where silphium and moly grow. Alchemists on the island brew an elixir from silphium and moly that gives the residents of the island unusually long lives and physical vigor. The average lifespan is approximately 500 years. As a result of the effects of this elixir, and also as a result of the life long physical training and military discipline undergone by natives of New Colchis, all women from the island tend to be larger and stronger than the human average elsewhere, and even if physical strength is not the chief discipline they cultivate.

The founding Mediterranean population, since the original settlement of the islands, was augmented by the rescue of a number of slave ships that were raided or shipwrecked during the period of the Atlantic slave trade. The female cargo of these ships were recruited into the population and trained.

Men are only allowed on the island temporarily, and are not exposed to silphium or moly. Shipwrecks occasionally toss them up, and others were formerly brought there by raids, until an informal relationship with Paragon City was formed. Any men are housed on a compound on Oës. Men washed ashore there often choose to stay, and perish of exhaustion after several years. Those who leave are made to drink of the waters of oblivion. Because of the longevity enjoyed by the female population, few children are currently needed to maintain a sustainable population. By grace of the goddesses, all children born on the island are female.

The language spoken in the islands is a variety of spoken Late Latin. Greek is also known. English has recently become known there.

The religion practiced in New Colchis is a female-centric version of the Roman religion. Minerva is the de facto head of the pantheon there. Venus, Juno, and Vesta are also worshipped, as are Vulcan and Neptune. The private, personal worship of the junones loci is almost as important as the public cult of the gods. Animal sacrifice is the chief act of public worship.

New Colchis has public temples of Minerva, Vesta, and the Olocunæ. The temple of the Olocunæ is more of a courtyard. It serves as a public meeting and concert hall, since the chief act of worship performed in their honor is frenzied dancing and drumming. Others have smaller or private shrines.

The women of New Colchis chose to found a republic rather than a monarchy. Executive power is wielded by two Consuls, in connection with the Comitia Centuriata, the legislative assembly. The two consuls serve two year terms, and one is replaced yearly, so the two terms are staggered. A consul may not serve successive terms, but the same woman may be made consul more than once. Years in the public calendar are reckoned by consulships: i.e. the year of the founding of New Colchis is Julia Victrice primum Alba Altaque consulibus - "when Julia Victrix for the first time, and Alba Alta, were the consuls".

In addition to the Consuls, the chief leader of the armed forces of New Colchis is a Polemarch. She commands the six Centuries into which the armed forces (i.e. the entire population) of New Colchis are divided: the infantry, the engineers/artillery, the cavalry, the navy, the archers, and the intelligence/clandestine service. Voting for the Comitia Centuriata is representative by branch of service, rather than by a vote of the entire population, and each branch of service sends five representatives.

Military exercise, athletics, and gladiatorial combat are the chief sports and entertainments of the population. Most aspects of life are governed by a spirit of fierce competitiveness, a struggle for dominance. Women are seen as the obvious superiors to men; one aspect of this traditional wisdom is expressed in a New Colchian proverb: viri molles et vim carent. ("Men are squishy, and lack stamina.")

In addition to athletic and combat games, sculpture, music, and poetry inspired by classical models are practiced.

Paragon City was discovered in New Colchis during the Rikti War. An attempted Rikti landing outside New Colchis was repelled fairly handily, but this brought with it the intelligence that the people of Paragon City possessed unknown technologies.

An initial landing by an expeditionary force was made along the Adams River in approximately 2003. This did not go well: the first Paragonians encountered in numbers by the expeditionary force were large numbers of lightly armed Skulls, giving rise to a contemporary catchphrase in New Colchis: Vadite. Venamini. Calvarias trucidate! ("Go. Hunt. Kill Skulls.") It became evident to the would be conquistadoras that they were dealing with a large territory whose immediate conquest and occupation presented logistical challenges that were currently beyond them.

No official contacts were made with Paragon City, but one of the Skulls who escaped them managed to get word of the existence of New Colchis to the Circle of Thorns. High ranking members of the cult were intrigued, and managed to get onto the island by their spells. Here, they stole the Jewel of Hera. Heraclea, the first citizen of New Colchis to be sent to Paragon City and who registered as a hero there, was a gladiator who was sent on a mission to retrieve it from the mages.

Official relations between Paragon City officials and the amazons of New Colchis have been placed on a more secure footing since the discovery of the Troll Cure.

Trolls, of course, are former citizens who turn into trolls due to their abuse of Superadine. Early on in her career, after Heraclea captured an Ogre, she chose to toy with him for a while before turning him over to the Zig. While Superadine gave the Troll endurance and strength beyond ordinary human capacity, this was not limitless, and repeated acts of exertion were able to burn off some of the Superadine in the Troll's system.

After the discovery of the Lost Cure, heroes from New Colchis conducted experiments on Trolls. They discovered that by repeatingly taxing the Trolls' constitution, they were able to tap out the remaining Superadine in their systems and restore them to some semblance of normality. The discovery of the Troll Cure persuaded Paragon City officials to cautiously release small numbers of Trolls into the custody of New Colchis amazons for the purpose of being cured.

The arrival of a handful of Trolls in custody on New Colchis pretty much confirmed their opinion of men - superficially strong but lacking in stamina, brutish, and dumb as a sack of hair. The details of the cure are a closely guarded secret. Heraclea has only said that it involves "wrestling the troll into submission and the application of pressure to sensitive points, to make the Troll overexert himself." She insists that only amazons could actually administer it. Crey physicians who examined former Trolls reported a number of minor soft tissue injuries, but nothing that seemed permanently harmful. After undergoing the cure, the Trolls are administered the Waters of Oblivion, so they do not recall the details themselves.

The discovery of the Troll Cure laid a foundation for peaceful co-existence between New Colchis and Paragon City. The Troll Cure means also that New Colchis no longer needs to raid shipping to meet its admittedly small need for human males. New Colchis also offers to train female heroes in its traditional martial disciplines.

Closer ties with Paragon City have induced a small amount of wanderlust and unrest in some elements of the population, though: especially those who sought but have not been admitted to Troll Cure training. A number of unauthorized New Colchis amazons have taken off on their own, and some of this chaotic element have ended up in the Rogue Isles.

The following are heroes who hail from New Colchis: