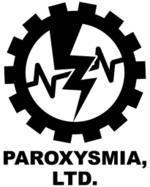 Paragon City University has a branch in Salamanca referred to as the Occult Studies Annex. From here, scholars study the natures of magic and the spirit realm, and the surrounding area gives them plenty of experience in the field. It wasn't too long ago when one particular group of researchers began looking into the reason that so many spirits are held to this world by suffering and regret: seeking relief through the so-called "unfinished business." The exact details of their research has yet to be made known, but it's no mystery that their studies eventually turned from spectral essences to living beings, and the applications of their findings are as diverse and interesting as they are terrifying. What they found is that pain--the discomfort and suffering that people feel--can actually be harnessed scientifically and converted into an electrical current.

The process of converting pain into electricity has a beneficial effect on the target organism. Removing pain results in relief and subsequent healing of the target, which has been shown to be more effective than traditional medications.

The researchers received substantial funding from questionable sources after they announced their discovery and used the money to construct a research establishment called Paroxysmia, Ltd. They have all but abandoned their mystic origins and rely exclusively on the production of new technology and biological modification. Eventually, Paroxysmia conceived a process in which a living organism can be physically endowed with pain absorption abilities and subequently electrical powers. This led to the introduction of two field-test subjects, codenamed Kompashun and Katharsys. The subjects are brother and sister, and have volunteered to gather more research as it pertains to the modification process.

Of the two test subjects, the sister has assumed the identity of Kompashun and is training her new powers in Paragon City as a Hero. Her style is arguably gentler than her brother's, and she has chosen to focus her efforts on progressing the strength of her healing abilities rather than her electrical attacks. Kompashun has also employed a technique where she will become more powerful when her allies are in distress: the more pain her comrades feel, the more energetic she becomes and the more she can do to help them. This has resulted in her healing capabilities being developed far beyond those of her electrical powers, which in and of themselves are somewhat lackluster in effectiveness comparatively.

The other subject, the older brother, has adapted the name Katharsys and is working the field in the Rogue Isles as a Villain. His steadfast mindset and unwavering resolve have helped him become quite a frightful figure indeed. Rather than concentrate his energies on advancing the effectiveness of his healing abilities, Katharsys turned his attention to his electrical attacks: maximizing the pain they generate to fuel his system all the more. His lightning is red in color, much to the bafflement of Paroxysmia, and he enjoys what he is able to do with it. Katharsys's healing powers, while not as profound, are still extremely effective and his teammates benefit greatly from them: they are rejuvinated during battle by having their pain taken from them, resulting in increased aggressiveness and ferocity.