Sergeant Set, a Mastermind Demon Summoning / Pain Domination and his Minions are The Rearguard, the cleaning striking force of the Vanguard.

Set was a recuit selected by Vanguard Sorcerers to merge his body with the soul of a demon. The merger was succesful and was increased his magic capabilities in order to lead and manipulate demons. Since Sergeant Set and his minions use to clean the Riktis battlefields and, if necessary, can be the ultimate weapon of mankind.

Named like metal heroes, the first demonling is adept at manipulating fire, the second blasts your foes with cold attacks and the third is able to wield hellfire to deal fire/toxic damage. 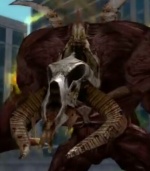 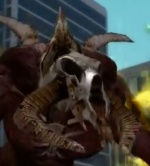 Angus & Malcolm, named like the AC/DC guitarists are Ember Demon who manipulate flame and Hellfire Gargoyle who is cloaked in hellfire and has skin as hard as a rock.

Named like the Heavy Metal Bassist, Trujillo is a Demon Prince from the deepest reaches of the Abyss. It's mighty among its kind and is a master of cold powers. It serves the conjuror only so that it may wreak havoc upon the material plane. It has some defense versus lethal, smashing, fire and cold attacks.

Conjure demons from the depths of the netherworld and beyond. These demonic servitors wield hellfire and serve him through some dark compact. He's capable of summoning a variety of different infernal minions each with its own strengths and weaknesses.

Pain Domination gives to Set the ability to manipulate, nullify and amplify pain. Ultimately this grants the user powerful healing, buffing and debuffing powers. Its healing output is unmatched !