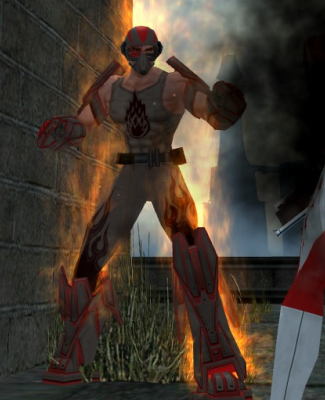 Where There's Smoke is a level 20 Technology Brute on the Virtue server, played by @Patteroast. His primary powerset is Dark Melee and his secondary powerset is Fiery Aura. He has pool powers from the Leaping set.

Where There's Smoke is a member of the League of Extraordinarily Evil Gentlemen supergroup.

Well, then. Now that I've developed this pyrotechnic armor, what chump can I find to test it out?

Man, there's tons of mad scientists 'round these islands. There's gotta be at least ONE I can swipe some nice tech from...