The unknown soldier, who became the most known and one of the most respected soldiers in Lord Recluse's army. 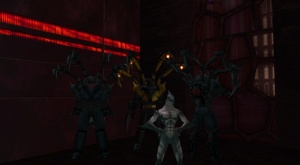 Setting himself up for greatness on the day he entered boot-camp, he quickly climbed the ranks withing Captain Mako's Crab Spider division. Within years he had the Elite Webmaster Rank, hundreds of successful missions, and an almost invincible aura.
He became well known for his 'Do or Die' mentality, and was even respected my Lord Recluse himself. So much, that Lord Recluse had set him up with the same technicians that worked on Black Scorpion's armored power suit, and instructed Ghost Widow to subject Nephila to a Mindlink so deep, that it deleted most of his memory. After receiving his improved Crab Spider pack, Lord Recluse wanted to push Nephila to his limits, to see if he was perhaps worthy of one day being in the same presence as Captain Mako, Black Scorpion, Ghost Widow and Scrirroco. Captain Mako felt threatened, he thought that Lord Recluse wanted Nephila to take over the command of the Crab Spider soldier division. He however did not foresee the bigger picture Lord Recluse had for Nephila, and also forCaptain Mako himself.
When Captain Mako learned that Nephila had a very dangerous mission that was simply listed as 'Black', he tried to set Nephila up for failure, and even hoping that he could eliminate Nephila altogether. Captain Mako enlisted some of the most feared Arachnos Soldiers he had to his disposal, and send them on their way. Not fully sure of their mission, they quickly learned their goal when they ambushed Nephila. Torn by their loyalty to Nephila, the leader who led these same soldiers in countless missions, they resisted fighting Nephila. To reward them for their actions and loyalty he made sure they got away safe, because he knew the punishment for disobeying direct orders, and helped them escape the Rogue Isles.
Nephila completed his mission, and after his debriefing with [[paragonwiki:Lord Recluse|Lord Recluse], he confronted Captain Mako. Nephila informed Captain Mako what he learned from the ambush that was send after him, and wanted to know why Captain Mako betrayed his most loyal Lieutenant. Captain Mako tried to salvage his grace by claiming it wasn't him who send those soldier to kill Nephila, and didn't know who did. This answer and tactic did not fall well with Nephila, and he began his attack on Captain Mako. Lord Recluse was proud of Nephila's completed solo mission, and wanted to know if Nephila was interested in a new mission. Lord Recluse was informed that Nephila went to Captain Mako's quarters.He never expected to find Nephila and Captain Mako in battle. Lord Recluse broke the two apart, and demanded answers to what was happening. Captain Mako fabricated the lie that Nephila felt he was better than Captain Mako, and deserved the command of the Crab Spider army, and the only way to get that was to kill Captain Mako. Nephila told the truth about what happend during his mission. Because Nephila did not debriefed Lord Recluse about the events in the mission, and because the only ones who could clear Nephila's name were not to be found, Lord Recluse was forced to believe Captain Mako's story. Reluctantly he called for the only punishment handed out to traitors, the death penalty.
Word spread about Nephila's treachery through the Rogue Isles like a wild fire. The men he saved himself from the death penalty, the same men who were ordered to kill Nephila, send out messages to their former squadron leaders about the truth. Respected by those same men he led in battle, the same who were ordered by Lord Recluse himself to punish Nephila for his crimes against Arachnos, now helped Nephila escape to Paragon City.
Nephila knew what he had to do, contact an old foe by the name of Dark Energon, the leader of the Freedom Legion. Dark Energon agreed to a sit down with Nephila, and the meeting lasted for hours. The Legion's Council was called in, and again a lengthy meeting followed. The result of this meeting, Nephila was inducted into the Freedom Legion as a Prospect. He had to prove himself to the rest of the Legion, to the rest of Paragon City, that he could also fight for good.

Nephila has proven himself quickly and has even risen to the rank of Councilor.
He is one of Dark Energon's most trusted men, and has earned the respect to train new recruits, and lead teams into battle. He has even found ways for some of his former Arachnos Soldiers, to join the the Freedom Legion. Nephila is also the main informant when it comes to anything Arachnos. His powers have increased since he joined the Legion, and he is considered one of the strongest members of the Freedom Legion. Nephila's team skills have proven valuable to numerous teams, teams from inside the Legion and out side the Legion.
KinetX, the Legion's lead scientist made Nephila a special helmet, one that blocks Ghost Widow's Mindlink powers. Now that Lord Recluse understands that Nephila will not re-join his Arachnos army, he's become one of the most prestigues targets for Lord Recluse's most loyal men. Still respected by the men and women he led in battle, Nephila can walk freely in most parts of the Rogue Isles, since they know that Nephila has a mutual respect for them.
However, they know that when Nephila is on a mission, to either get out of his way, or face the consequences. 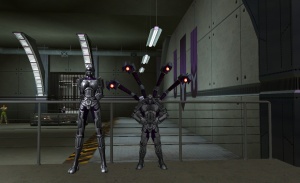 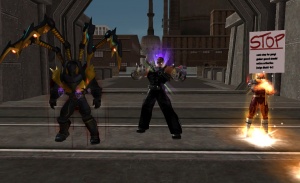 
Since Nephila had work done by Black Scorpion's technicians, he was already more powerful than most other Arachnos Soldiers. Combine that with the Legion's lead scientist KinetX, his Incarnate powers and his 25 Billion Inf build, Nephila becomes a perfect team player and a master tactician who is well known in Paragon City, the Rogue Isle's and even in Praetoria, as someone who can handle anything he encounters.