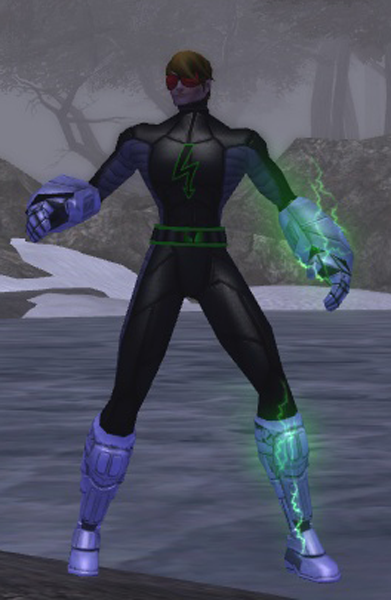 Fastway exists on All Servers and is currently level 35.

Studies provided by DATA and SERAPH have shown that Gerald Von Schtumgard, aka. Fastway exists in all twelve known Tehran shards as well all Praetorian shards and likely hundreds of other undiscovered shards and temporal streams. It is theorized that the rift that pulses within Fastway could be the source of all teleportation and portal technology and that if he ever dies, that technology will likely die with him, unable to access a rift that no longer exists.

Several events that have occurred over the history of mankind may be in relation to Gerald’s displacement. Such events may or may not include many UFO sightings, the infamous Philadelphia Experiment, and mass disappearances such as that of the Roan Oake colony. He has literally been to almost any time imaginable and has affected the world and the universe in boundless ways.

It has been determined that Gerald no longer ages, heals at an incredible rate, has the strength and agility equivalent to an Olympic gymnast at his prime and has dimensional access to the negative energy plane, allowing him to use such in combat. Those who cross his path should beware.

Gerald Von Schtumgard was born on December 21st 1920. A naturally intuitive mind and a keen interest in science combined to make him a virtual wunderkind in the field of electronic technology. By the age of 14 he had graduated from high school and was sent to Oxford to study. While there he learned of Nikola Tesla and began studying his work intensely. He began writing letters and soon he began to receive letters in return. After graduation Gerald returned to Germany with a full doctorate at the age of 19.

Then in 1939 Dr. Gerald Schtumgard was forcibly enlisted in the Nazi regime. He was made to do horrendous tests on innocent and unwilling subjects over the next 3 years. Only his study of Nikola Tesla’s mind boggling experiments with electricity and his regular correspondence with the man kept him from committing suicide in the midst of Hitler’s madness. When he was finally released from duty in 1942, Dr. Tesla had been shunned by the scientific community and denounced as a heretic, a mad scientist. Fear of his newest theories gripped the world of science. When Gerald found him in New York, Nikola was close to death, but still fervent about his theories and experiments. Tesla spent the last year of his life in bed, being watched over by Gerald and his housemaid Gertrude. When he died, he left his notebooks and all of his possessions to the only man he believed truly understood him, his friend Gerald.

Gerald did not bother to explain anything to Nikola’s family, who had abandoned him. He and Gertrude married and moved to New England, where he immediately took up the reigns and continued Tesla’s work. The most important experiment, according to Tesla, was his Teleportation Electro-transmotor. It was the future of mankind, he had always said. It was Gerald’s destiny.

During this time Gerald and Gertrude lived happily and started a family. They bore a daughter and two sons who were the joy of Gerald’s life, but he still could not put behind him his and Dr. Tesla’s work. He bordered on fanatic in his devotion to the work and his hatred for the scientific community at large and its disloyalty to his genius mentor.

Five years later, in 1948, Gerald completed the design in a warehouse building on the outskirts of Portland, Maine and began his first test of the amazing machine. He placed a cat in the transport chamber and started the teleportation process. The machine cranked and chimed. Sparks flew in all directions. Arcs of lightning ripped the lab to pieces. Gerald was knocked unconscious when a fire extinguisher was struck and launched itself across the room. When he awoke, the entire machine was gone, cat and all, and in its place there was a strange distortion, a rift in the fabric of space.

Gerald rebuilt the lab and began to study the rip, which would appear and disappear at regular intervals. Through further study he found that items that entered the rift would appear in other locations all around the world, but that anything living would be annihilated by the electro-transmotion.

By 1950 he had rebuilt the Teleportation Electro-transmotor and modified the design to add a spherical containment around the rift. He theorized that with some sort of control device to protect him, he might be able to teleport to any location on Earth. He designed a pair of Gauntlets and Boots to this end. They would allow him to control the flow of electricity around his body and therefore control the teleportation through the rift. Knowing that this test would require a human subject and not wanting to endanger the life of an innocent, Gerald donned the Gauntlets and Boots and stepped into the machine. The machine was working. He had control. He was able to see locations all over the world presented on the interior of the sphere. He reached out and touched one and vanished. The resulting explosion turned the building into rubble and ripped the earth beneath it. An earthquake shook the foundations of all New England and the rift was gone. Gerald was never seen or heard from by his family again.

It wasn’t until 2001, when the Medical Transportation Grid (MedCom) of Paragon City was first activated, that Gerald reappeared. He had been teleporting randomly through time and space for over 40 years, jumping from year to year with no control over when or where he would go, unable to finish any experiments, unable to recover from the displacement of the rift, unable to return to his family. The Grid stabilized him, though at the same time dividing his essence among hundreds of alternate dimensions and time streams. And every time the Grid was used Gerald would lose a little more of himself.

Having been displaced in time so much over the past years, Gerald adjusted to the current time rather quickly and over the next few months, he learned to use a computer and began searching relentlessly for any news of Gertrude and his children. He was beginning to think he would never find any clue to their fate when he found an article in a Maine newspaper from 1953. The article headline read, “Mother Dies for Her children!” Apparently Gertrude had remained true to him after his disappearance and had spurned several advances by a former colleague, Dr. John Wu Long. He continued to harass the family however and one night he had broken into the house. Gertrude heard their daughter, Annabel screaming from her room. She hurried down the hall to find John on top of her bracing her arms behind her back. As Gertrude entered he pointed a gun at the closet door, against which sat Karl and Nikola, their twins. Gertrude pleaded with him and persuaded him to leave the room. Once in the hallway she was able to make a grab for the gun, which went off, killing her instantly. After seeing this John Wu had fled, but had later turned himself in to the local Sheriff’s Department and confessed everything. Gerald’s children had been taken in by the state and later adopted. There were no further records of them after that.

Gerald took this news hard. He could only hope his children were still safe, still alive. He reestablished his bank accounts, which had matured greatly over the years, and started a search for them by hiring a detective agency. He would find them, even if he had to wait an eternity.

In 2002 Gerald founded Fastway Inc., patented his and Tesla’s designs for teleportation and temporal travel (giving due credit to Tesla for the original theory) and rebuilt his laboratory in Paragon City to begin studying the effects of the MedCom Grid on his Electro-transmotor Devices. He found that he was unable to remove the Gauntlets or Boots without suffering incredible pain. Arcs of electricity would pulse from his body, his skin would burn and blister and he would fall unconscious. He had quite literally become the rift that had taken him.

For a time Gerald worked as a hero for hire. He started his own detective agency, Fastway Investigations, hiring on several detectives from the agency he had previously used and while they searched for his family, he fought crime in the city. It wasn’t long before he was banned from work with many other agencies. His methods were too extreme and he often put the public in danger. When he began killing the criminals he tracked down it was all over. His licenses were revoked, he was labeled a vigilante and warrants were put out for his arrest. He was forced to go into hiding and bide his time while he continued his experiments.

As time went by experiment after experiment failed and Gerald lost more and more of himself as these so called super heroes continued to use the Medical Transportation Grid. Then in 2005 a new source of teleportation technology was revealed in an area called the Rogue Isles. Someone or something was causing huge drains on the MedCom while at the same time strengthening Gerald’s cohesion. In his rush of anticipation Gerald liquidated his business holdings and relocated his laboratory and detective agency to the Isle of St. Martial. There he began to study a local scientist called Aeon. The work done by this Aeon was seemingly closely related to his and Dr. Tesla’s, but there was something wrong. The designs were too exact, the theories too closely related to be coincidence. Aeon had stolen these designs, and not only that, he was using them to control events in the Isles and abroad. Gerald decided to use the powers granted him to fight the Aeon menace and hopefully rebind his multiple selves into one again if Aeon’s research proved to be as useful as he suspected. He created the Rogue Isles Taxi Service as a front for his operations.

Recently Gerald has discovered a new link between the Rikti and the MedCom grids used in both Paragon City and the Rogue Isles. He has found that the power signature created by the Rikti teleporters appears to nearly match the signatures of the MedCom. This cannot be coincidence. As a happy side effect the energy fields produced by the Ritki ships that have been appearing lately appear to stabilize his condition. This requires further investigation.

Now known as Fastway, Dr. Gerald Von Schtumgard is an unstable personality with a propensity toward violence. He has a brilliant mind but is seemingly unable to control the menacingly brutal side of himself. His desperate search for his children, for Aeon, the Rikti and a cure for his interdimensional condition drives him ever onward and anything or anyone that gets in his way is in extreme danger.

Gerald Von Schtumgard currently owns and operates both Fastway Inc. and the Rogue Isles Taxi Service (commonly called the RITS by RI citizens). He is constantly looking for new clues about Aeon and the connection between he and the Rikti, while at the same time furthering his own research in Temporal and Quantum Physics. Tesla's design style is a trademark he carries through in all of his designs as a sign of respect for his old mentor, though the technology he is working with now is far in advance of the original Tesla designs. Fastway was instrumental in developing a way to map the patterns the Rikti use in their bombing raids. His device for mapping this pattern is now used to help citizens of the Rogue Isles as well as Paragon City avoid the Rikti menace, while at the same time helping villains and heroes to track and defeat them.

The player behind Fastway can be contacted in game and on the forums @Blackavaar.