Hunting Machine is a level 50 Crab Spider Soldier / Training and Gadgets / Crab Spider Training Arachnos Soldier on the Triumph Server, played by @Obsidius. He is a a member of the villain group Oni's Tears and the current pet project of technological mastermind Iron Reign.

After climbing through the ranks of Arachnos, dealing his bloody revenge to Malta while simultaneously upstaging the Black Scorpion, Iron Reign was able to successfuly gain funding from Arachonos to conmtinue his research into advanced robotics. The IronWerks HM1C "Hunting Machine" is the first forray into this new partnership with Arachnos.

The HM1C is a prototype android Arachnos soldier. Unlike human soldiers, it is a cost-effective solution immune to demoralization and capable of hardware upgrades without messy surgery or risky mutations. It is tuned into all wireless frequencies, can scan newspapers for hidden instructions, and will follow any order that does not immediately conclude in self-termination.

The HM1C has successfully passed all preliminary trials, and may soon go into full production.

Concept & Development of the HM1C 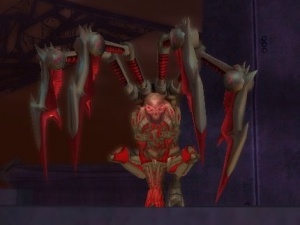 Iron Reign had secured his place in the upper echelons of Arachnos, an unintended but welcome side-affect of his vendetta against the Malta Group. With his revenge complete, he had removed the only objective he had set up for himself; now that the objective was gone, he had run into a personal dead end.

Iron Reign decided to use his expertise in robotics to benefit Arachnos, the organization that had helped him realize his revenge. Indeed, his unique skills were a perfect compliment to Lord Recluse's ideals of technocratic order.

Iron Reign's first project, he determined, was to increase Arachnos ground force efficiency by replacing the Arachnos Soldier corp. Most of the corp, being escaped prisoners, criminals that fled jurisdiction in other countries, and mercenaries, cared little for Arachnos' ultimate goal of order through technology. Many were corrupted, bribed, or just lazily collecting paychecks. Many would rather flee a prolonged confrontation than stand their ground and possibly be incapacitated, returned to custody, or killed.

Iron Reign's goal was to create robotic Arachnos soldiers to replace their frail, inefficient human counterparts. Using the data from his own robotic soldiers as a reference, Iron Reign has calculated that Arachnos Soldier efficiency could be increased by at least 75% using robotic replacements, based on the following premises:

Because cost seemed to be of little concern within Arachnos' technocratic philosophy, Iron Reign had high confidence that, once enough data is collected from his prototype android Crab Spider, he would have little trouble pleading his case to Lord Recluse himself. In fact, over time, without the cost of food or quarters associated with human soldiers, the robots would save Arachnos millions of credits.


Iron Reign's first target for his robotic soldiers was the Crab Spider Corps. Crab Spiders represented one of the most repugnant side-affects of Arachnos - morons with technology. In his opinion, those who didn't understand technology should not be allowed to wield it. It was akin to giving a Neanderthal a laser rifle - it might be able to use it if it didn't blow off its own head, but it would never truly appreciate the great scientific progress needed to create the item. The Crab Spiders were often the worst offenders, being nothing more than dumb muscled brutes with cybernetics grafted to them. They all reminded him of his moronic former patron, Black Scorpion - and like his former mentor, they all needed to be knocked down a few pegs.

The HM1C is a culmination of Iron Reign's expertise into the fields of advanced robotics and robotic AI. After building a Wolf Spider variant to gather data in regards to basic Arachnos troops, Iron Reign rebuilt the prototype from the ground up with wide-area Crab Spider Armaments, efficacy adapters to decrease power consumption, pneumatically-loaded legs for jumping over long distances, and after more field testing, electric discharge equipment for use in offensive situations.

Offensive laser cannons, debilitating Venom Gas, close combat pneumatic fists, and the deadly Omega Maneuver create quite on offensive package for one single robot. However, the best part of the design is its ability to summon Arachnos Disruptor Drones and Spiderlings, increasing offensive capability by several fold, especially when combined with the HM1C's C3 systems (discussed below).

Advanced AI is capable of directing human counterparts (when working with metehumans) to maximize combat efficiency. However, when combined with other HM models (Comming SOON™!), combat efficiency and coordination improves exponentially through a C3 (Command, Control, and Communications) protocol over encrypted wireless transmission.

Even with its advanced armament and armor, lightweight alloys and composites keep the weight of the HM1C down to around 300 lbs., not much heavier than its human counterpart in full Crab Spider armor.

A future option may allow the HM1C to mimic the combat abilities of a Wolf Spider Huntsman using improved C3 systems and Arachnos rifle-based attacks, although the HM1C's Crab Pack is not currently modular and cannot be removed at this time.

Hunting Machine in the proposed armor configuration for the Crab Spider Replacement program.

Through various back-channels, most Arachnos troops know about the HM1C field testing, and obviously are not happy with the prospect of possibly being replaced by robots. Because of this, most Arachnos troops will attack the HM1C on site, if they think they can get away with it. Arbiter drones have been ordered to defend the HM1C prototype, but often the HM1C must rely on its own armaments and defenses when away from Arachnos installations in the field.

Recently, however, with its improved weapons and armor configuration, the HM1C has become a formidable opnonent for even the most seasoned Arachnos soldiers, including its Crab Spider Webmaster counterparts. In fact, the only Arachnos troop that has much of a chance of successfully damaging the HM1C are Lord Recluse's loyal Bane Spiders.