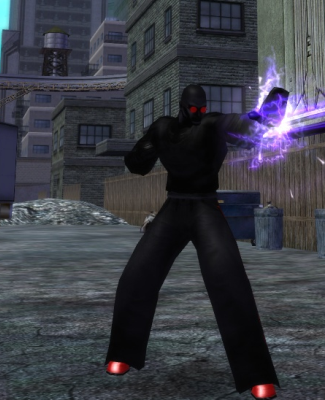 Llecarud is a level 23 Magic Blaster on the Liberty server, played by @Patteroast. His primary powerset is Electrical Blast and his secondary powerset is Energy Manipulation. He has pool powers from the Teleportation set.

Llecarud was created in early March, 2005 on Infinity, but was later deleted. He was remade on October 5, 2006 on Liberty.

Llecarud is a member of the Team RAWR supergroup.

Little is known about the mysterious Llecarud, and in fact nobody can find records of him going back further than a few years ago. The only clue to his history are some rumors linking him with the enigmatic Professor MW: at least one person claims to have heard Llecarud refer to him as his father.