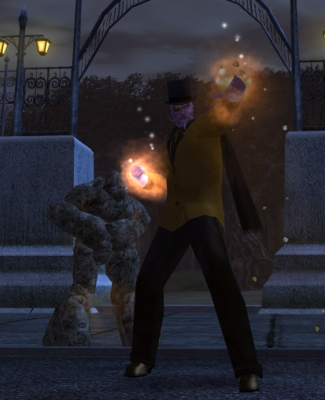 Lord Richter is a level 50 Science Controller on the Freedom server, played by @Patteroast. His primary powerset is Earth Control and his secondary powerset is Sonic Resonance. His ancillary powerset is Stone Mastery. He has pool powers from the Speed set.

Lord Richter is a member of the Devil Never Cry supergroup.

If you ask James Richter, he'll deny that he's actually from Milwaukee. From a young age he was a science whiz, and started college at 15. About his second year of Grad school he started claiming to be British, even using a terrible British accent. His classmates at the time thought he was kidding, but the punchline never came, and as he became more insistant, they eventually just started playing along. After a few strangely strong earthquakes in Wisconsin, Richter (now claiming the title Lord) took his Applied Seismology degree and moved to Paragon City.

Bucking the trend of people called 'mad scientists' being either villains or on the sidelines, Lord Richter registered as a hero and continued his research. On the side he even managed to marry and start a family, who pointedly ignore the whole British thing. During the Rikti War he saved a few British heroes and achieved a dream when he was knighted for his efforts and granted honorary British citizenship.

At least his accent's gotten better over time.