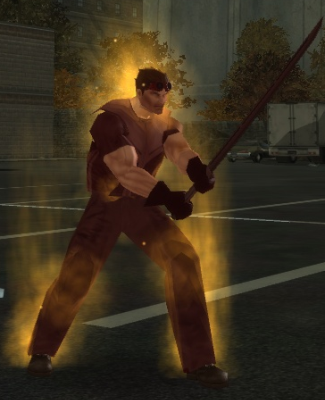 Modern Hephaestus is a level 19 Magic Scrapper on the Virtue server, played by @Patteroast. His primary powerset is Katana and his secondary powerset is Fiery Aura. He has pool powers from the Leaping sets.

Modern Hephaestus was created on November 29, 2008.

Modern Hephaestus is a member of the Gravy Train supergroup.

Benjamin Smith had come to accept the fact that he wasn't particularly skilled in any field or trade. However, he chose to follow the footsteps of his forefathers, and became a blacksmith. He was barely able to put out satisfactory work, but he pushed on. He always tried to keep an upbeat attitude.

One day, after breaking three swords in a row, he started to despair. "How did my dad do this? How did my granddad do this? How the hell did the ancient Greeks manage to do this?!? Hmph. At least they had Hephaestus to ask for help. I wish Hephaestus could help me..." Suddenly, flames shot out of the forge, forming the image of a man. Benjamin leapt back and the flames spoke to him, "It has been many years since anyone has wished for my assistance. You have a great potential, Benjamin. I will show you the way." The flames retreated, but with one final burst something shot from the forge: a perfectly crafted blade.