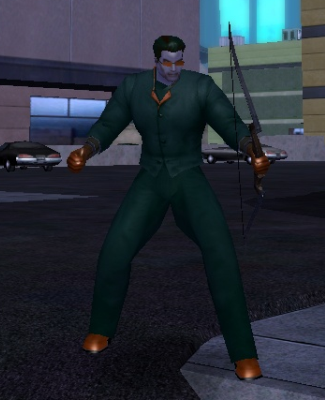 Patticus is a level 50 Natural Controller on the Infinity server, played by @Patteroast. His primary powerset is Illusion Control and his secondary powerset is Trick Arrow. His ancillary powerset is Psionic Mastery. He has pool powers from the Leaping, Concealment, and Speed sets.

Patticus is a member of the Everyday Heroes supergroup.

Patticus is a master of misdirection. He previously has worked as a stage magician, but admits to friends that he has no actual magic gift: He simply is very good at making people think what he wants them to. His nimbleness and dexterity also come in handy with archery, which he is an avid enthusiast of.