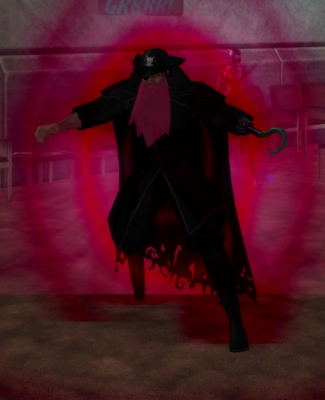 Pinkbeard the Pirate is a level 27 Natural Mastermind on the Infinity server, played by @Patteroast. His primary powerset is Ninjas and his secondary powerset is Pain Domination. He has pool powers from the Leaping and Leadership sets.

Pinkbeard the Pirate is a member of the Phobia supergroup.

Yarr, I've been sailing the eight seas for three months now. And one of my maties said, "Ahoy, Pinkbeard the Pirate! There be a McCarl's King over there! Yarr, we could stop and buy a bike!" But the manager was extremely rude, so that's why I'm here in the Rogue Isles. To find the pony I never loved.

Ahoy, it's been a while since I've talked to anyone. Yessee, me crew mutinied on me and left me on a desert island for a few years. But now I be back, and I've replaced the crew with robots! Ninja robots! Being the pirate's natural enemy, they'd never suspect that! A pirate ship crewed by robot ninjas! Arrr, and I named them after me favorite podiatrists, dermatologists, and chiropractors.