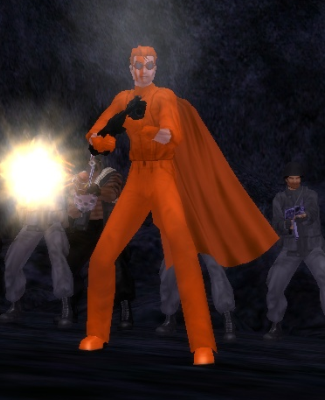 Professor Orange is a level 50 Science Mastermind on the Infinity server, played by @Patteroast. His primary powerset is Mercenaries and his secondary powerset is Poison. His ancillary powerset is Mace Mastery. He has pool powers from the Leaping and Leadership sets.

Professor Orange is a member of the Dream Stalkers supergroup.

Formerly a professor of chemistry, Professor Orange discovered several interesting substances. First, he found several potent poisons. Then he discovered a compound that could make a normal person into a mindless slave. Finally, he came across a chemical that caused him to go completely insane. Now he is determined to make the entire world colored orange. Nobody's really sure why.