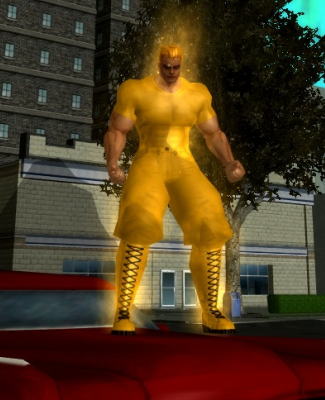 Really Angry Man is a level 30 Natural Tanker on the Freedom server, played by @Patteroast. His primary powerset is Fiery Aura and his secondary powerset is Super Strength. He has pool powers from the Leaping and Fighting sets.

Really Angry Man is a member of the Devil Never Cry supergroup.

Steve was just an ordinary guy. Then, one day, his wife left him, his dog died, and he got fired. Then, on his way home, some Circle of Thorns kidnapped him and tried to use him to summon a demon. This did not make him happy. In fact, it made him angry. Really angry. I mean, REALLY really angry. So angry he burst into flames and smashed them all.

Now he is The Really Angry Man. He burns and smashes things that make him angry, especially telemarketers.