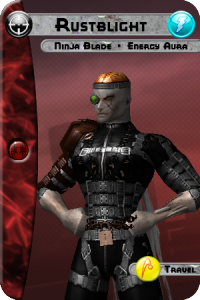 Rustblight, as a trading card.

One tragedy in the life of Alec Gardner was not enough, apparently. Not long after his wife was found murdered in the streets of Kings Row by the vicious minions of Dr. Vahzilok, his son was taken by them as well and turned into a zombie abomination. His son had been grief stricken and looking for a bit of revenge, unfortunately he found it, but was not able to survive the resulting melee. Alec spotted the mutilated an re-stitched body of his son shambling home when he had gone out looking for the missing boy. It was at that moment that Alec snapped.

He had suffered the death of his wife at their hands and barely stayed on this side of sane in the aftermath, looking into the eyes of his now less than human son was more than he could take. Alec went willingly to a stretch of sewers in which Mortifactors and Reapers were known to hang out. He went with the intention of asking to be recruited into the mad doctor's army of Eidolon soldiers. He knew that his only chance of survival was in speaking with the most human among their ranks. Of course, he had no intentions of serving Dr. Vahzilok loyally, he only wanted superpowers... and the ability to get close to the doctor himself: so that he could tell him exactly what brought on his death!

Surprisingly, Alec was able to be turned into an Eidolon, and was mercifully unconscious for the majority of the procedures. Once complete, he had the ability to corrode and rust metal objects in his proximity, as well as the perfect disguise to become an assassin of twisted zombie experiments.

Having exhausted himself for years in his quest to take down Dr. Vahzilok from the inside of his "group," Alec now seeks to redeem the evil he has done as an Eidolon, though his quest has always been mostly pure. He seeks to join the ranks of the more... traditionally heroic ones in Paragon City. However, he fears that he will never quite fit in among them considering his appearance. It is a miracle that he retained as much of his sanity as he has for this long!

Rustblight, as he is now known, always keeps this clipping on his person to help remind him of his mission and to keep him from succumbing to the temptation to become just as depraved as the doctor who made him.

— This section pertains to out-of-game information and is included for the benefit of the reader, or to include other OOC information.

Rustblight is a character that was created for the specific purpose of making use of the rusted katana customization option. And so, my Rust Eidolon was born, a willing volunteer to join Dr. Vahzilok's twisted minions. Why would he be willing? Because his wife had been killed in Kings Row by the Vahzilok and he wanted to be able to kill the good Doctor with powers that were given to him by the Doctor himself. Irony runs a bit high with this dude.

Also, I love his bio in-game, it is written as if it were a chunk of a newspaper article about the attack in which his wife was killed, and it is smeared with blood. I find it to be an excellent hook when I can create a bio that is NOT just another boring biography page.

All this character's badges are listed here on City Info Tracker.