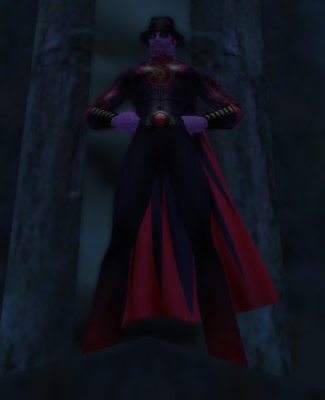 Setebos is a level 50 Science Scrapper on the Infinity server, played by @Patteroast. His primary powerset is Spines and his secondary powerset is Regeneration. His ancillary powerset is Darkness Mastery. He has pool powers from the Flight and Fighting sets.

Setebos is a member of the Everyday Heroes supergroup.

Once a crew member on a top secret mission to explore the mysterious moon of Setebos, years later he was found in deep stasis on his ship, with no sign of the rest of the crew. To this day he claims he remembers nothing of the mission, but some have their doubts. Either way, the years of radiation combined with whatever happened changed him, and make him how he is now. With no other recourse, he was forced to work at Big Sal's Sausage Bar under the stage name Setebos.