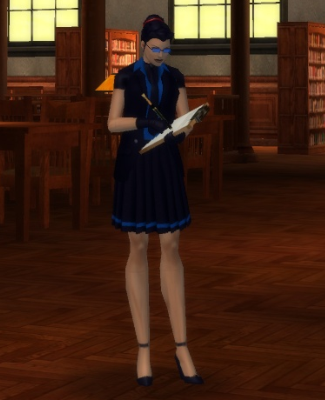 Undersecretary Liv is a level 18 Natural Arachnos Widow on the Freedom server, played by @Patteroast. Her primary powerset is Widow Training and her secondary powerset is Teamwork. She has pool powers from the Leaping set.

Undersecretary Liv was created on December 13, 2008.

Undersecretary Liv is a member of the Les Enfant Terribles supergroup.

Ms. Lièvre has served in Arachnos her entire life. She is in training to become an Arbiter, and she hopes to eventually become the head of the Rouge Isles Department of Education. Some have described her as an 'Evil Librarian'.

She doesn't seem to mind that characterization.