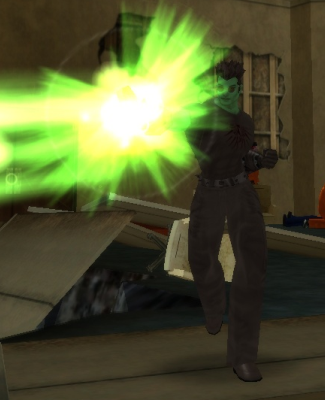 Yetniy is a level 45 Mutation Corruptor on the Pinnacle server, played by @Patteroast. His primary powerset is Radiation Blast and his secondary powerset is Kinetics. His ancillary powerset is Electricity Mastery. He has pool powers from the Speed and Leadership sets.

Yetniy is a member of the Enclave of EVIL supergroup.

One time, someone told Yetniy that they thought he looked like a Troll. They died slow and painfully. Let that be a lesson.

Yetniy immigrated to the United States from Ukraine. He was born near Chernobyl between the meltdown and the evacuation. His green skin marked him from birth, but the full extent of the radiation's effect on Yetniy didn't become apparent until later...

Yetniy grew up in chaos, and thus has learned to always look out for himself first. In the past, he sought the protection of street gangs, and was an Outcast for a period. However, he quickly realized he was much more powerful than those around him and set off on his own. He primarily uses his gifts to steal and manipulate to get what he wants.