Angel Tina is a Heroic Defender on Defiant. Her Power Sets are Dark Miasma and Sonic Attack.

She has been remade on Reunion, where she is currently level 13, and has founded the Schwesternschaft nordamerikanischer Piratenengel.

She dreamed of being a Hero as a teenager, which she became after getting herself killed in the Second Rikti Invasion, then returning as an angel. She is a bit controversial, with some people praising her for her commitment and others accusing her of not taking things seriously.

Angel Tina is the Primal Earth counterpart to Demon Tina.

Tina Hansen is an American of German ancestry. The Hansen family migrated in the 1930s in view of the Nazi regime, her grandfather being a child at that time. Wilhelm Johann Hansen became the first Hansen born in America in 1955; he later met exchange student Linda Biernot at Paragon University, and they eventually married, staying in the city. Tina, their daughter, was born on 1989-03-09.

In high school, Tina was the leader of her clique, with some people considering her a cool sportsgirl and some others a dumb blonde. She and her friends loved the Heroes they grew up around and more or less seriously wanted to join them eventually. They had a major rivalry with another clique led by Lizzie Crane.

Death and What Came Next

After graduation in 2007, Tina and most of her friends were going to study at Paragon University, but in late July, the Rikti invaded again. Perceiving an opportunity to be heroes, the gang signed up to become an official Vanguard unit, and under strange circumstances, actually succeeded (or at least they got that impression themselves). The group miraculously survived for a week without any major injuries; eventually, they got their hands on a Rikti teleporter, and Tina managed to use it to get on a Rikti Drop Ship and blow it up from inside.

Surprised to find herself dead, Tina was accepted into a heaven for courageously defending her people (or so she would claim later). While she by no means disliked the place, the past week had been so much fun to her that she now wanted to be a terrestrial Hero more than ever; becoming an angel warrior to fight the evil forces of the netherworlds did not appeal to her that much in contrast.

However, Tina was soon approached by a mysterious god by the name of Nuroralamiel, and they worked out a deal that allowed her to draw on his power to indeed return to Earth to fight for good.

Angel Tina manifested herself again in Paragon City in late August and has been fighting for Freedom Corps ever since. While some accuse her of being careless and therefore a poor role model, she proved to be reliable and was eventually granted larger wings and a halo to wear as status symbols.

Tina was invited into a Supergroup right at the start of her career, but the group was still new and would never actually get off the ground. Having more similar experiences over the years, Divine eventually suggested that she apply for membership in Generic Supergroup 101. Tina did so when she met other members in late May 2010 in a battle against Lusca, and received her promotion to Lieutenant in mid-February 2011. 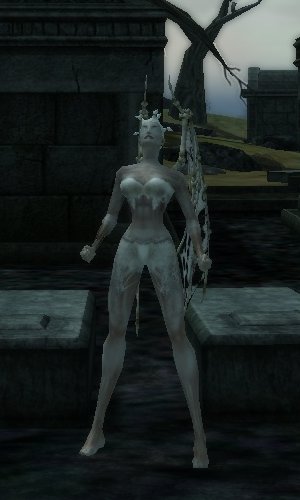 Lizzie Crane and friends had left to attend college in a more peaceful city, but when they eventually learned about Tina's career, Lizzie naturally had to follow, regardless of the questionable way Tina had gotten into the business. In May 2008, Lizzie had struck a deal with a god of death who went by the name of Kaczasbupon, and was preparing a ritual supposed to make her Tina's counterpart. However, Nuroralamiel took notice and, knowing that Kaczasbupon was evil and fearing that he would turn the girls into will-less servants, sent Tina to prevent this. While Tina arrived in time to at least interfere with the ritual, a defiant Lizzie tried even harder to complete it. As a result, she turned into what was basically an undead angel, her friends being zombified as well, but with Kaczasbupon being prevented from controlling them: they had become zombies without masters.

A local mage guild imprisoned the zombie girls, but around Halloween 2010, Lizzie presumably managed to regain control over her body and escaped. Now commanding her undead comrades, she went to the Rogue Isles attempting to establish herself as a Villain and Tina's archenemy. Of course, she was actually no match for the by now quite experienced Tina, and subsequently joined rival gang Generic Villaingroup 101. 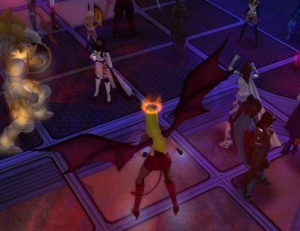 At a Halloween party

Angel Tina has a carefree attitude and pretty much became a Hero because she expected it to be cool and fun, which pretty much proved true; the fact that she is beyond death ultimately hardened her attitude. Some consider her an anti-hero because of this, but Tina does care about her friends and would never do evil (at least not consciously).

Angel Tina uses magic powered from the netherworld, primarily as so-called dark miasma, weakening her foes and strengthening her party in various ways. For direct attacks she prefers sonic, derived from her tendency as a teenager to sing intentionally bad karaoke. However, she mostly refrains from doing so when on a team (for obvious reasons). She also has minor melee skills.

Tina is also frequently praised for her leadership in battle, much to her critics' surprise.

As is traditional for angels, Tina manifests herself with wings, i. e. is a flyer. She also knows spells to teleport other people not too far away to her location.