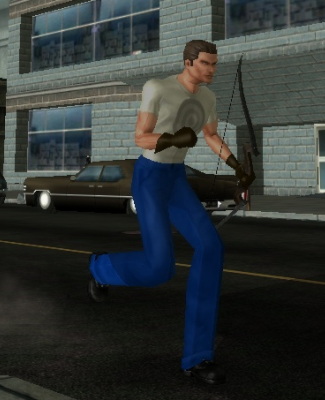 Bill Bowman is a level 29 Natural Defender on the Pinnacle server, played by @Patteroast. His primary powerset is Trick Arrow and his secondary powerset is Archery. He has pool powers from the Flight set.

Bill Bowman is a member of the Hammer of Not Bickering supergroup.

Just an ordinary guy trying to make a difference.

Bill Bowman was born in Atlas Park, the son of a shopkeeper. Later on, his father left him the store. A joke he heard many times living in Paragon City was that his name made him sound like an archery superhero. He laughed this off; it was just his name. One day after seeing an ad for archery classes however, he decided to try it as a lark. He found that he was actually quite good at it.

When the Rikti War struck, Bill found himself taking shelter in his home like pretty much any citizen. However, outside his window he saw an amazing sight: the famous hero Manticore fending off alien invaders with nothing more than a bow and arrow. Feeling a responsibility to the city he'd lived in his whole life, he picked up his bow and grabbed some odds and ends from around his store and went outside.

He managed to pick off a few Rikti before the war ended, and soon registered as a hero. Since then he's divided his time between managing the store and patrolling Atlas.