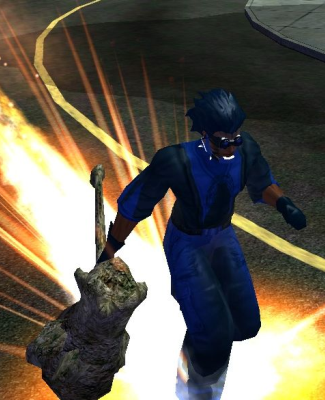 Dr. Fejwol is a member of the Everyday Heroes supergroup.

When Jefferson Lowell was growing up in Kings Row, few people would suspect he'd one day become a hero. He was a smart, quiet kid, who eventually got a scholarship to Paragon University in Steel Canyon. From there he found his calling: Nanotechnology. He quickly earned his PhD and rose in the field, and easily settled into the faculty. His knowledge of technology combined with his working class roots led many heroes to his office to talk to him, and he became a well-known contact around the city.

When the Rikti invaded, Dr. Lowell couldn't just stand by and watch the heroes he'd befriended rush into danger. He constructed a rough nanite armor that could construct various minerals to deflect different types of attack and went out to fight as well, registering as Dr. Fejwol (some of the letters in his first and name rearanged.) Today he splits his time between his research to improve his armor, working with heroes as a contact, and teaching classes on Applied Nanotech, Armor Studies, and Hammerology.