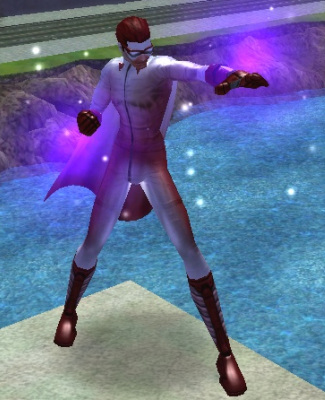 Explomadoza is a level 50 Mutation Defender on the Infinity server, played by @Patteroast. His primary powerset is Empathy and his secondary powerset is Electrical Blast. His ancillary powerset is Power Mastery. He has pool powers from the Leaping, Teleportation, Concealment, and Leadership sets.

Explomadoza is a member of the Everyday Heroes supergroup.

Explomadoza's story starts years before his birth, in the 1950's, when nuclear testing was in full swing. At first, the nuclear powers tried signing deals with the native islanders from the places they wanted to test on, but eventually they started to simply evict them, and after they were done let the islanders go back without warning them of the danger. Explomadoza's parents came to the island to treat the people living there for the illnesses resulting from the radiation. They stayed for several years, and gave birth to a son there. Unfortunately, the same radiation causing the sickness on the island affected their son, too. Unlike the islanders though, it caused him to become stronger.

Years later, Explomadoza's parents died trying to rescue people injured from a volcanic eruption when a second one buried everything for miles in ash. Taking on his parents' life work, Explomadoza travels the world trying to keep people from harm and aid other heroes when they are in need.