Through the Flames (Pinnacle) 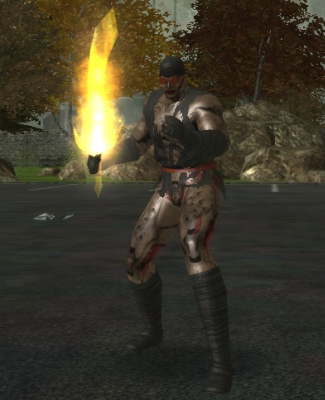 Through the Flames is a level 16 Mutation Scrapper on the Pinnacle server, played by @Patteroast. His primary powerset is Fiery Melee and his secondary powerset is Regeneration. He has pool powers from the Speed set.

Through the Flames is a member of the Hammer of Not Bickering supergroup.

A burning building, people trapped inside. Hellions throwing fuel on the fire, laughing. But then there's the sound of a door inside being kicked down. The Hellions' laughter stops as someone appears - someone who looks angry - and rushes out towards them... through the flames.

He was born with a mutation to the genes that control growth and healing. Whenever he is injured, not only does the injury heal incredibly quickly, it grows back much stronger than before, and with little to no pain. He didn't know the magnitude of his gift until one day when he was young and he woke up with his bedroom full of smoke... none of his family escaped, and neither did he... though he tried, he couldn't get out of the burning house, and as his family burned alive, he found himself standing alone in the fire, until there was nothing left to keep him in.

It's perhaps an understatement that he has a particular hatred of arsonists.