Alaestor is a level 50 Warshade on the Triumph Server, played by @Obsidius. He is a member of the Paragon Regulators and acts as their liaison to Vanguard.

Alaestor is an ancient Warshade who sought to escape from underneath the Nictus leaders who instigated the Kheldian War. One of his first acts upon reaching Earth in the mid 1st century was to defect from the Nictus, and has been fighting them ever since. Current affairs have brought Alaestor to Paragon City, in an effort to counter the Nictus plan to take over Earth. He also uses his expertise in science to aid Vanguard in defending against Rikti interdimensional threats.

"What today's heroes know of our war against the Nictus is very little. It is a battle that has been fought for millenia. The Nictus came to this planet centuries ago, as so did I. I joined with Arturius Rex in his battles against them, and through the ages have joined with many brave hosts to continue my battle, each time relearning my powers. The number of Nictus on Earth was small - until they joined with the Council. Now that the war here on Earth has begun in earnest, I have joined the heroes of Paragon City to continue our war."

((Alaestor is based upon my character with a similar name from Dark Age of Camelot. This origin, combined with the information in the A Path Into Darkness arc and the happenings of the Imperious Task Force, form the basis of Alaestor's back story.))

Eons before the Council came into power, Alaestor was transformed into a Nictus during the great rendering. Many Kheldians were promised by the Science Lords that the transformation would allow them to be unbound forever; instead, it turned them into energy-consuming aberrations of their former selves. The Nictus that would later be known as Alaestor was one of these unfortunate victims of science.

After the Peacebringer faction of the Kheldians declared war on the Nictus for using a super-weapon to steal their life energy from afar, the Nictus fled their adopted home planet through the Shadow Seeds. Alaestor saw this as his perfect chance to escape. Under the guise of solidarity, Alaestor and several other hopeful defectors traveled with some Nictus leaders to a backwater planet called by its locals as Terra, or Earth.

The Defection & The End of an Empire

When they arrived on Earth in the 5th Century, the Nictus Leaders and their allies wasted no time setting up their new positions among the primitive populace and leadership of Earth. One Leader overtook an emperor by the name of Romulus Augustus. Alaestor himself was begrudgingly forced to take over a host or soon die; he in turn assumed the identity of a praetor, Alaestor Aurelianus. It was this first host from which the Nictus received the name which he uses to present day.

It did not take long for Alaestor and other defectors to quietly plan their escape. Soon after arriving in Cimerora, Alaestor and his "Warshade" allies conscripted for duty in the far-off northern island of Britannia, under guise of renewing "Roman" interests there. They lacked the power to take on Romulus directly, especially with his stolen title of Earthly leadership, but hoped to fortify a remote location in case his plan succeeded. Although they feared retribution from Romulus when he realized they had no real intention of serving him, his wrath would be slow to reach them so far away.

As fortune would have it, Romulus was deposed soon thereafter. In overreaching his authority, usurping the emperor Imperious, and, according to rumors, gaining favor from time travelers, he brought too much attention upon his Nictus insurrection. "Gods" from the future (including Alaestor's future self) helped overthrow Romulus' tyranny and return rule to Imperious, ensuring that the Nictus plot was set back indeterminably.

Alaestor and the other Warshades soon settled in Britannia, joining the local military there and eventually becoming leaders through their military status. They joined the local war leader, Lucius Artorius Castus, a former Roman himself. Together, they defended Britannia from invading Saxons and the like, with their first victory at Mount Badon. The also prepared in secret to defend the island against any Nictus insurgency that should come from Romulus' fallen empire in Rome.

Eventually, a new threat arrived in the form of Artorius' cousin Medraut. Taken over by a Nictus insurgent who saw Britannia ripe for the picking, Medraut usurped Arturius' throne while he was across the English Channel. Alaestor and other Warshades helped Arturius defeat Medraut and his Nictus allies and followers at the Battle of Camlann, but both Arturius and Medraut were killed by each other's hand during the fierce battle.

Lying Low Through the Ages

After the Battle of Camlann, Alaestor become reclusive from most human affairs, instead concentrating on vigilence against Nictus insurgency. Through the years, he passed through his host's family tree, with the eldest son being told the truth of his father when he was old enough to understand. When the father died, the eldest would willing become the next host for Alaestor, on through the ages.

Several hosts helped humanity through the wages, bot in the fields of science and warfare. However, as to not expose the "family secret," most of these roles were low key or second to other people.

Alaestor helped to sabotage several Nictus attempts of Nictus subterfuge throughout the ages, including during the Crusades, the Inquisition, and the Gunpowder Plot.

When the Rikti attacked Earth in 2002, many cities across the world were attacked, including London. Although Hero 1 was in Paragon City defending against the worst of the invasion, other English and European heroes bolstered against the London invasion. Having fought his shadow wars for centuries, Alaestor finally had to reveal the family secret to his human kin and the world at large. Using his Warshade powers, William Livingston assumed the name of his Warshade counterpart Alaestor and joined other heroes in the defense of London. Although they succeeded in holding back the Rikti until Paragon's Omega Team forced the Rikti to withdraw, William Livingston suffered mortal wounds during their defense. On his death bed, surrounded by family, William passed Aleastor on to his son and Oxford graduate Edward Livingston.

The Rise of the Council

Alaestor had remembered the surprise attack of Paragon City by the 5th Column during World War II, and how the brave hero Atlas had given his life so that defenses could be mustered to successfully defeat the attackers. During that time, however, no one, including Alaestor, knew that the 5th Column was being led by an ancient Nictus.

When the puppet masters behind the 5th Column, the Council, revealed themselves and their Nictus supports how had been hiding for centuries, there was little that the Warshade faction could do alone.

Fortunately, the Peacebringers had arrived during the Rikti War, and many closet Warshades had also emerged to repel the alien invaders. The Warshades were quick to form a diplomatic truce with the Peacebringers, and joined forces to stop the Council and its Nictus from dominating the world.

Because Alaestor had just bonded with a new host, and because he had been relatively out of practice for centuries, his powers were weak. But he knew that he had to stop the Nictus once and for all this time. After lengthy discussion with his family and their blessings, Edward Livingston left his doctoral studies at Oxford and immigrated to Paragon City, whose burgeoning Kheldian population set the stage for a battle against the Nictus. He immediately applied for and was granted a hero license, and started working for Paragon City's SERAPH department and with Alaestor's older counterpart, Shadowstar. He also became a member of a volunteer supergroup, the Paragon Regulators.

The War Against the Council 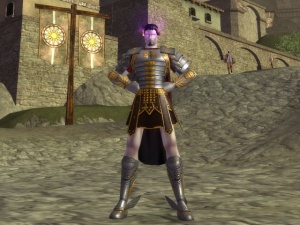 During the course of his early career, Alaestor's main focus was battling the Council. It was during one of his investigations that he learned of the Council's use of the Shadow Seeds to attempt a full-blown invasion of Earth, similar to what the Rikti had attempted. Furthermore, the man behind the plot and the former leader of the 5th Column was a man named Requiem. Through an old journal, Alaestor discovered the appalling truth - that Requiem was one of the Science Lords with whom Alaestor had originally travel to Earth. Alaestor was able to stop the Shadow Seed plot, but not before Requiem had vanished.

As Requiem had been dogged by heroes and the Council, he had fled to an unknown location. It was through his supergroup's leader and honorary Midnight Squad member Obsidius that Alaestor learned not where Requiem had escaped to, but when - back to their point of origin on Earth, in ancient Cimerora. Requiem planned to use modern technology and 5th Column sympathizers in the past to aid Romulus and seal the ultimate Nictus victory against an unprepared ancient human race. Alaestor took this development very personally as he second guessed himself - had he not fled to Britannia in those early days, he may have stopped Romulus' plan before it had come to this.

Alaestor gained the trust of the Midnight Squad and used their Aspect of the Pillar to travel back to ancient Cimerora. With the help of like-minded super-powered heroes and villains alike, Alaestor corrected his centuries-long mistake and not only brought Requiem to justice, but also crushed his former dictating leader, the Nictus known as Romulus Augustus. After all, it was better to let a dictator like Imperous rule than to cast the Earth in eternal Nictus darkness.

Doctorate and Duties with Vanguard 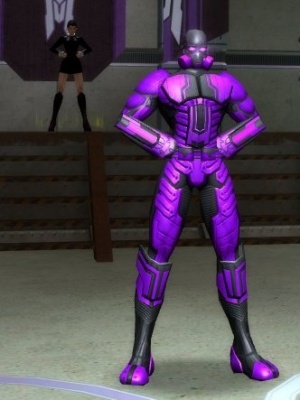 After defeating Requiem and Romulus, Edward was able to finish his studies at Paragon University, gaining a of Doctorate of General Physics. With his degree combined with his combat skills and experience, Alaestor joined the ranks of Vanguard during the Second Rikti Invasion. Since then, Alaestor has not only served as a Vanguard operative in field missions, but has also used his studies of interdimensional physics to improve Vanguard's early warning systems to alert Earth against incoming Rikti threats. He also acts as the Vanguard liaison to the Paragon Regulators.