Azure Huntress is a Heroic Defender on Union. Her Power Sets are Trick Arrow and Dark Blast.

She has been remade on Reunion, where she has reached level 26 so far.

She is an experienced mage who lives in Paragon City as a professional hero, both actively fighting villains and working at Freedom Corps behind the scenes, with little private life. She is infamous for her unnatural selflessness, being something of a workaholic, and having a rivalry with the villainess Evil Huntress.

She is described as "pure good" and indeed appears to have an ultimate conscience. Interestingly, she has a "pure evil" doppelgaenger, Evil Huntress, who is a villain in the Rogue Isles and who enjoys to challenge her. Azure Huntress also has a daughter, who has been trained by Freedom Corps as Azure Huntress Jr. and who may or may not have inherited her goodness.

Azure Huntress is notorious for missing public appearances in favor of more important missions. Therefore, she is not as famous as one might expect.

Her background is also mostly unknown because she prefers not to talk about it (deeming it unimportant), along with Evil Huntress frequently spreading rumors about them. What appears to be most likely is that the two are demigoddesses of European or West Asian origin. There is also an apparent relation to Dark Huntress, a former wandering mercenary. Both Azure Huntress and Evil Huntress perished during the Rikti War, but eventually returned. While they were heavily weakened, there is no further indication that they are imposters.

Her civilian name is Martina Sindicic, but she may have made it up when she moved to the USA. As far as Azure Huntress herself is concerned, her real identity is most likely that of Azure Huntress.

Azure Huntress's pre-Paragon City history is unclear due to her own reluctance to talk about their past and Evil Huntress's statements being unreliable. Following is what researchers (having compared private statements and allusions with their own knowledge) consider most likely.

The most commonly speculated origin of the Huntresses is a single demigoddess (or other kind of metahuman) born around 1940 in Western Eurasia. Starting in the 60s or earlier, she became a wandering mercenary known as Dark Huntress, declaring herself to be neutral – she would work for anybody as long as they didn't go too far.

Around 1989, an unknown accident apparently duplicated Dark Huntress. Her mind was affected by this, as one of the new entities ended up conscience-stricken, the other with no conscience at all. The doppelgaengers remained unaware of each other's existence.

The Huntress with scruples changed her moniker to Azure Huntress and became a Hero, although her evil counterpart's rampages may have interfered with her public perception. She was also mysteriously pregnant and, to this day, claims not to know who her daughter Valentina's father was.

Eventually, Azure Huntress decided to start a new chapter in North America, discovering Paragon City as a city of heroes from whom she could learn but who could still use her help. Fighting tirelessly, she soon earned respect from other heroes, but in an irony of fate, her unnatural "perfection" also generated controversy, with some heroes feeling that she made them look bad and some people even accusing her of trying to divert from something. Nevertheless, she eventually acquired US citizenship.

In the mid-90s, seeming evidence of Azure Huntress living a second life as a villain appeared. The truth was, of course, that Evil Huntress, as her evil counterpart now called herself, had arrived in the nearby Rogue Isles. While they were soon proven to be separate entities, Azure Huntress would continue to be blamed by the occasional people unaware of this. Evil Huntress would enjoy frequently challenging her counterpart, and they discovered they were connected in some way, possibly meaning that if one of them was successfully killed, the other would die as well.

In 1996, Azure Huntress came to be the leader of a group of controversial Heroes. Seeing the benefit of this, they formally founded a Supergroup called the Section of Heroes.

Azure Huntress was engaged to politician Eldon Alston in 2000, but they broke up when he realized her private life would always remain in the back seat. By contrast, city official Kenneth Ray, whom she started dating a year later, was impressed by this.

In 2002, the Rikti invaded, and Evil Huntress actually lured the attackers to hero bases, which she looted afterwards. Not surprisingly, most if not all Section of Heroes members were killed in the process. A shocked Azure Huntress then decided to stop her counterpart once and for all, and managed to somehow kill them both. 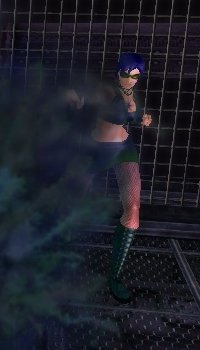 Inside the lion's den.

Azure Huntress supposedly became an angel in Heaven after her death, but in September 2007, she mysteriously rose from the dead. The apparent reason for this was that Evil Huntress had managed to revive herself, or trick somebody else into doing it. Their bodies had not decayed in the meantime, although the Huntresses were heavily weakened.

Azure Huntress joined Freedom Corps, successfully convincing old colleagues who had survived the Rikti War she was not an imposter, for which there was no actual indication anyway. Having lost much of her power, she began to work more behind the scenes.

In the meantime, Kenneth had adopted her daughter Valentina, taken up a job at Freedom Corps, and married Esther Holcomb, a somewhat successful businesswoman, earlier that year. By 2008, Kenneth's frequent meetings with Azure Huntress had made Esther jealous, and she tried to have her assassinated. This failed, and the subsequent investigation revealed that Esther had been working with The Family for years, possibly using Kenneth to spy on the Heroes. He subsequently had their marriage annulled, and resumed his relationship with Azure Huntress. They finally married in early 2010.

As Valentina had inherited at least some of her mother's powers, she had been trained as Azure Huntress Jr. during her absense. Unfortunately, she turned out to have a mental issue, causing her to perform even worse than her weakened mother.

Azure Huntress had long refused to found a new Supergroup or join an existing one, fearing she would endanger her comrades. However, in late March 2011, Evil Huntress joined The Cuckoo's Nest, a Villain group under the guise of an asylum formerly and possibly again owned by The Benedict Trust. Azure Huntress realized her archenemy might now have an edge over her. When she met Tyger in mid-April, the current leader of The Power Corps, a major hero group also formerly funded by Benedict, she finally applied for membership, which was confirmed within 24 hours.

Shortly afterwards, Evil Huntress partnered herself with Black Jodie, a brilliant scientist who had declared herself evil but had still seemed to hate anyone who would harm innocents. Azure Huntress's investigation seemingly ended in early May with her team accidentally killing Jodie, to much controversy. However, this had actually been a setup in order to damage the Hero's reputation; it was soon revealed that there had been at least two Black Jodies, both of them rogue clones of the real Jodie Kline, when the latter arrived. Joining Freedom Corps as Justice Jodie, she then unsuccessfully worked with Azure Huntress to capture the other clone.

Azure Huntress's husband Kenneth was killed during the destruction of Galaxy City on 9/13. When Evil Huntress arrived with Arachnos to take advantage of the situation, the doppelgaengers dueled. Presumably resulting from an experimental spell cast by her counterpart, Azure Huntress has occasionally been seen with a halo since then.

Following the destruction and re-formation of the multiverse, the Power Corps has ceased to exist. Azure Huntress has since agreed to co-lead a new Hero group called the Schwesternschaft nordamerikanischer Piratenengel (yes, seriously). She is now in a romantic relationship with Justice Jodie.

Azure Huntress appears to be "pure good", i. e. have an ultimate conscience driving her to do good whenever it appears necessary. This is a blessing for her environment but a curse for herself, because she frequently overworks and has to outright convince herself she needs to rest. Her private life also heavily suffers from this, of course.

She is very reluctant to talk about her pre-hero life, calling it irrelevant, possibly also because of her conscience, or out of fear of being held responsible for actions of her original personality.

The ultimate proof of Azure Huntress's selflessness came, of course, when she sacrificed her own life in order to take down Evil Huntress with her. However, she has stated she is not going to do that again, fearing that her doppelgaenger might subsequently find a way to revive herself alone.

Azure Huntress is an experienced mage. Possibly reluctant to use violence, she uses her bow to fire so-called Trick Arrows to weaken or restrain her opponents, although she does not have much of a problem sending Dark Blasts at them, either, especially when she is by herself. When on a team, she usually stays in the back, using her Trick Arrows as well as her leadership skills to direct her comrades. She is still somewhat weakened since her death and resurrection. She is possibly immortal (see below), but this does not make her less vulnerable than the average metahuman.

There is evidence that the doppelgaengers are not just identical twins, but that their bodies and/or minds are connected in some way. Azure Huntress once sacrificed her own life in order to take Evil Huntress down with her, and when the latter eventually had herself revived, the former returned as well, without having any explanation for it herself. It is speculated that if either of them dies, so will the other, and Azure Huntress seems willing to find out more about this.

Azure Huntress is rumored to be an immortal demigoddess. She is by no means invulnerable, however; her "immortality" seems to just be that her body will regenerate sooner or later. She can also be killed by special means, as proven with Evil Huntress, although her body notably did not decay. She appears not to age, either, or at least slower than normal humans.

She also possesses exceptional leaping abilities, which she employs for both defense and traveling.

As noted above, Azure Huntress is a die-hard, but as she is capable of killing Evil Huntress (at the cost of her own life), the reverse should also be possible, however unlikely. Still, there may be other special ways to kill an immortal, as has been done with other demigods in the past. It is speculated that if someone manages to kill Evil Huntress by whatever means then Azure Huntress will die, too.

The extent of Azure Huntress's deeds means she made a lot of enemies who would team up against her, if one can only convince them of a high probability of success.

Azure Huntress is never seen without her bow. As noted above, she has come to use it only for Trick Arrows, preferring dark magic for actual attacks. 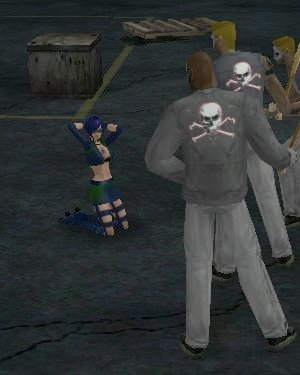 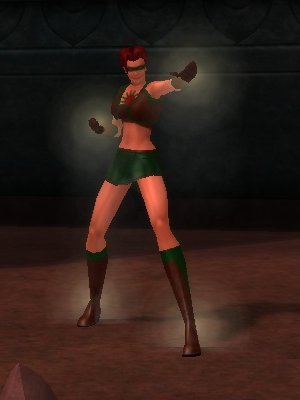