Evil Huntress is a Villainous Corruptor on Union. Her Power Sets are Dark Blast and Cold Domination.

She is an experienced mage holding an indeterminable amount of social power and essentially a professional villain; her everyday work includes attempts to increase her power (both personal and social), mercenary jobs and, most prominently, challenging heroes.

She describes herself as "pure evil" and indeed does not appear to have any conscience at all. Interestingly, she has a "pure good" doppelgaenger, Azure Huntress, who is a hero in Paragon City and whom she enjoys to challenge.

Not surprisingly, Evil Huntress frequently spreads rumors about herself that may be actually true, exaggerated or completely false. This makes it impossible to determine the actual amount of power she holds.

Her background is also mostly unknown due to these rumors, along with Azure Huntress's unwillingness to talk about her own. What appears to be most likely is that the two are demigoddesses of European or West Asian origin. There is also an apparent relation to Dark Huntress, a former wandering mercenary. Both Evil Huntress and Azure Huntress perished during the Rikti War, but eventually returned. While they were heavily weakened, there is no further indication that they are imposters.

Her civilian name is Editha Wynter, but there is no evidence that this is actually her birth name. As far as Evil Huntress herself is concerned, her real identity is most likely that of Evil Huntress.

Evil Huntress's pre-Rogue Isles history is unclear due to her own statements being unreliable and Azure Huntress's reluctance to talk about their past. Following is what researchers (having compared the somewhat credible statements with their own knowledge) consider most likely.

The most commonly speculated origin of the Huntresses is a single demigoddess (or other kind of metahuman) born around 1940 in Western Eurasia. Starting in the 60s or earlier, she became a wandering mercenary known as Dark Huntress, declaring herself to be neutral – she would work for anybody as long as they didn't go too far.

Around 1989, an unknown accident apparently duplicated Dark Huntress. Her mind was affected by this, as one of the new entities ended up conscience-stricken, the other with no conscience at all. The doppelgaengers initially remained unaware of each other's existence.

The Huntress lacking scruples let her evilness run wild, changing her name to Evil Huntress and likely inadvertently hindering her good counterpart's efforts to become a Hero. She became a wandering Villain, for the simple reason that she frequently had to escape police forces and heroes.

In 1995, Evil Huntress discovered the Rogue Isles as a place where she could settle down and be villainous and get away with it, as long as she avoided displeasing its evil rulers, which was fine by her.

In the meantime, Azure Huntress, as her good counterpart now called herself, had established herself in nearby Paragon City. The rivalry between the Heroes and Arachnos meant it was only a matter of time before someone became aware of the doppelgaengers, and Evil Huntress would enjoy framing the good one for her evil deeds. While they were soon proven to be separate entities, Azure Huntress would continue to be blamed by people unaware of this on occasion. Evil Huntress came to enjoy challenging her counterpart, and began looking into a way to triumph over her without killing herself, as they discovered they were connected in some way.

In 2002, the Rikti invaded, and Evil Huntress proved ruthless enough to lure them to Hero bases, which she looted afterwards, although whether she was actually allied with the invaders is unknown. The Supergroup led by Azure Huntress, the Section of Heroes, was also wiped out in the process. The shocked Hero then decided to stop her counterpart once and for all, and somehow caused both of them to die. 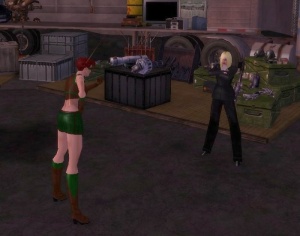 At the Black Market.

Evil Huntress supposedly became a demoness in Hell after her death and liked it, albeit not as much as being a human Villain. In September 2007, she managed to revive herself, or trick somebody else into doing it; this caused Azure Huntress to return to life as well. Their bodies had not decayed in the meantime, although the Huntresses were heavily weakened.

Evil Huntress was accepted into Operation: DESTINY, even though she was inevitably accused of being an imposter and not taken seriously as a result. Notably, there was no actual indication that she was not the same person. Since then, she has returned to her old ways, slowly but not unsuccessfully trying to rebuild her power.

When artificial halos became more common in late 2010, Evil Huntress considered getting herself a flaming one to emphasize her evilness, but was afraid it could be considered a cheap gimmick beneath her level. She eventually began wearing one occasionally in mid-March; rumor has it that this was the result of supernatural experiments, rather than intentional.

A few days later, Evil Huntress was on a campaign against Longbow in Nerva Archipelago (it wouldn't remain her only one) when she came across a few soldiers discussing morality, with one of them equating evilness with insanity. Overhearing this, she irritated them by commiting herself to a corresponding institution, The Cuckoo's Nest, where she was immediately classified as "Mad", a relatively high rank. Of course, the asylum was de facto a Supergroup of Villains; Evil Huntress had realized that a loose alliance like this might prove useful on occasion.

Rumors were flying thick and fast in the second half of April 2011 about Evil Huntress and Black Jodie, a brilliant scientist who had declared herself evil but still seemed to hate anyone who would harm innocents. It was said that Jodie had teamed up with the Legacy Chain against Evil Huntress, only for the latter to form a strike force and successfully hunt and take her down. However, Black Jodie reappeared a few days later as Evil Huntress's new partner (and not necessarily just on business), stating that her personality had at last been adjusted to match her beliefs. What actually went on behind the scenes has yet to be revealed. 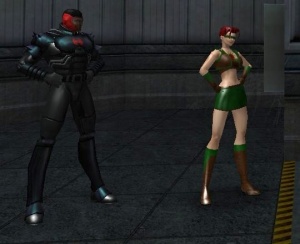 Waiting for an illegal auction to begin.

Evil Huntress describes herself as "pure evil", which by all accounts is correct, as she displays no scruples or conscience at all. In fact, she enjoys causing other people to suffer, particularly good ones. However, she is sane (or experienced) enough to be careful not to anger those people or groups that could overwhelm her. It is also speculated that she does care about the occasional individual person, albeit nowhere as much as about herself.

Pretty much everything Evil Huntress does is for her own enjoyment or to maintain or improve her power or status. She denies rumors that she strives to conquer Earth, saying that having to govern an entire world does not really appeal to her, although some consider this a defensive lie as she would not want Lord Recluse to consider her a competitor. The truth is that she would probably be satisfied with a position directly below Recluse. 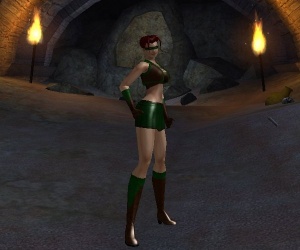 Evil Huntress is an experienced mage. Her primary attacks are Dark Blasts, but she also uses so-called Cold Domination techniques to spice things up. She has been heavily weakened since her death and resurrection, however. She is possibly immortal (see below), but this does not make her less vulnerable than the average metahuman.

Less prominently, she is capable of displaying a particularly frightening presence on occasion, as well as a very limited form of martial arts.

There is evidence that the doppelgaengers are not just identical twins, but that their bodies and/or minds are connected in some way. Azure Huntress once sacrificed her own life in order to take Evil Huntress down with her, and when the latter eventually had herself revived, the former returned as well, without having any explanation for it herself. It is speculated that if either of them dies, so will the other, and Evil Huntress seems to consider this a challenge.

Evil Huntress occasionally claims to be an immortal demigoddess, and this may actually be true. She is by no means invulnerable, however; her "immortality" seems to just be that her body will regenerate sooner or later. She can also be killed by special means, as proven by Azure Huntress, although her body notably did not decay. She appears not to age, either, or at least slower than normal humans.

Evil Huntress also possesses exceptional leaping abilities, which she employs for both defense and traveling.

It should be noted that while Evil Huntress is primarily a magician, she is not above using science and/or technology in her schemes.

As noted above, Evil Huntress is a die-hard, but Azure Huntress is still capable of killing her, at the cost of her own life. However, she has stated she would not do so again, out of fear her counterpart might find a way to return from the netherworld alone. Still, there may be other special ways kill an immortal, as has been done with other demigods in the past. It is speculated that if someone manages to kill Azure Huntress then Evil Huntress will die, too.

The extent of Evil Huntress's actions means she made a lot of enemies who would team up against her, if one can only convince them of a high probability of success.

Evil Huntress is, naturally, neither trusting nor trustworthy. That being said, she frequently forms temporary or loose partnerships in order to gain or maintain power. 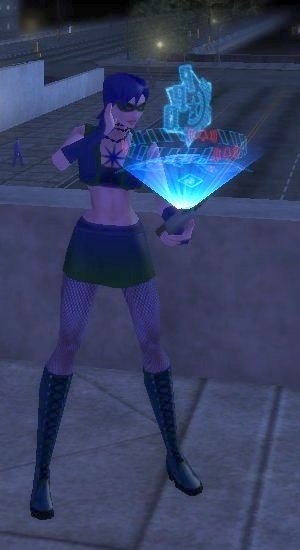